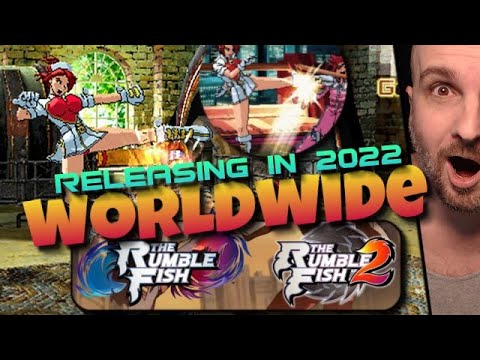 The Rumble Fish 2 is a fighting game developed by Dimps Co., Ltd. It was operated in the arcade in 2005 and is now provided for Nesicaxlive. It features a smooth 2D expression by the company’s own S.M.A. (Smooth Model Animation), 16 attractive characters, and flashy special moves.

For the game system, a 5-button system is used for weak, strong punches, weak, strong kicks, and attack avoidance. There are also two types of gauges: an offense gauge that can be accumulated by attack and a defense gauge that is accumulated when guarded. It can be used to consume offense gauge and can connect from a combo to a combo, or an impact break that consumes a defense gauge and prolongs the opponent’s attack when guarding. There are also boost dives that consume both gauges and use special mode specific to characters for a certain period of time.

In this work, which is the first home / PC transplant, the game screen is made of a wide screen at 16: 9. In the game mode, training mode and gallery mode are prepared. In the training mode, the strength and gauge of AI can be customized. In the gallery mode, character art, music, and behind the scenes are introduced, and the core fans who know the arcade version of the time can enjoy it. In addition, it has also been revealed that the online match mode is installed, and the online code has a rollback system.

3Gooo Di Costanzo’s Nicola commented that Dimp’s development team created an extended battle system and provided infinite strategies to players. And the 3goo mission states that this popular title is to introduce the wonderful features of this game by deploying this popular title on consoles and PCs, and by installing a place where you can learn comfortable online matches and combo correctly. 。

The Rumble Fish 2 is scheduled to be released in winter 2022 for PC (Steam)/Nintendo Switch/PS4/PS5/Xbox One/Xbox Series X | S version. According to Nicola, Di Costanzo will make some surprise announcements before the release.

Dead by Daylight There are Wong Survivor Perks & Habilidades